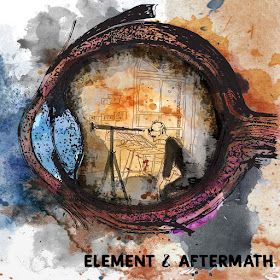 In a lot of ways, punk rock and math rock are the antitheses of each other; the visceral speed and energy of punk make precision playing near impossible, while math rock’s focus on intellect and instrumentation can all but negate the chaotic emotional content necessary in punk. Although they may seem incompatible at first glance, plenty of artists are paving a road between the two genres, keeping the energy high as they roll through jazzy chords and complicated time signatures. With Element & Aftermath, stop.drop.rewind walk this line between prog and punk with confidence, creating a harmonious balance between their captivating melodies and methodical performances.

The music on Element & Aftermath is something of an anomaly—shaped by four musicians who clearly understand their instruments, and yet know that a kickin’ hook is worth as much as a nasty time-signature-hopping breakdown. The guitars work overtime as they run up and down the neck, splashing their color chords between speedy melodic riffs. The bass dominates the low end with punchy tones and vicious lines of notes, while the drums spread syncopated fills that only serve to complement the string section. Above this landscape of sound, the vocals mix extremely catchy choruses with finely-tuned harmonies (an oft-overlooked avenue) that blast their compositions into the atmosphere.


Stop.drop.rewind presents an excellent blend of tones and emotions on Element & Aftermath, creating a record that is diverse as their approach to writing it. Tunes like “I Was a Portrait” and “Main & Lincoln” wield pop-punk choruses that demand singing along, while the opener “The Entire Orchestra” or the jazzfest “Eraser” choose as their weapons precise musicianship and sharp amelodic chord changes. Yet through it all, there is not a single song on Element & Aftermath that feels inaccessible; each uses the perfect ratio of technical precision and delicious hooks to attract every kind of listener and keep them entangled in stop.drop.rewind’s sonic web.

The lyrics of Element & Aftermath are as intricate as the composition. Each song is laden with images that carry as much literary weight as they do emotional depth. Lines like “Over the trees, the changing leaves, late summer breeze / Will carry me until it sets me down” in “Yellow Roses” use focused imagery to create a vivid scene for the listener, chaining each piece of the picture together to form a cohesive portrait. In addition, stop.drop.rewind avoid relying on clichés or dead-horse phrases, instead opting to put their own spin on those concepts; for instance, “The Dissonance” takes an old adage and brings it into mythic proportions with the lines “Carry every failure on your shoulders / Chips turn to bricks turn into boulders.” It’s exceedingly rare that a record is a fun to read as it is to listen to, but with Element & Aftermath, stop.drop.rewind keep their pens working as hard as their instruments.


So whether intense riffs and time signature changes are your cup of tea, or if you prefer thrashing chords and hyped vocal melodies, stop.drop.rewind has your back. Each of the ten tracks on Element & Aftermath keeps the energy maxed out while spinning mathy syncopations and chord changes. There’s as much for the head as there is for the heart on this record, and I’d bet that a single listen through will leave you as hooked as I am.

My Top Track: "The Dissonance"

You can find more from stop.drop.rewind, including show updates and news, on Facebook. Then head over to their Bandcamp page to grab your own copy of Element & Aftermath.
woodytjo at 10:16 AM
Share