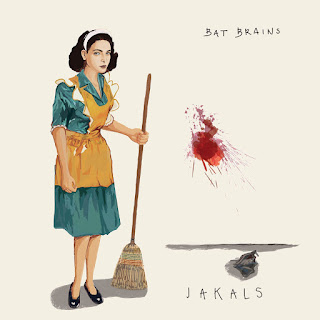 Anxiety appears to be the plague of the youth. It haunts the mind, a volatile little voice that trips us and tricks us into a constant loop of second-guessing every decision we make. There is nothing like feeling uncomfortable in your own existence, unsure that you are even worthy of existing—and yet this feeling is near-universal in today’s youth. It’s an experience that so many musicians are attempting to broach, but with their new EP Bat Brains, Boston rockers Jakals have captured that feeling of lonely terror and are showing us how to overcome it.

From the opening rush of “Porcelain” to the final fading notes of “It’s All the Same,” it’s obvious that Jakals is a band intimately familiar with disconnection. Every song sounds like it was written in a confessional—the lyrics are painfully honest, the baring of a soul that has known the depths of sadness and adversity. Lines like “I don’t belong anywhere / I’m always a stranger” and “When I was young I saw that I wasn’t enough” impart an intimacy that is almost unnerving with how much it reveals.

There is without doubt much pain and introspection woven into Bat Brains, yet the instrumentation on the EP buoys that emotion with intense energy. The vocals are powerful, taking fearless runs and delivering the timid lyrics with vicious sustain and vitality. The guitars brand the chord progressions with searing melodies and bright tones, mixing gritty fuzzes against colorful cleans. The bass thumps in the low end like an angry neighbor hitting their ceiling with a broomstick, while the drums slice out powerful grooves and fast fills.

Jakals really lay into their performances throughout this EP, giving Bat Brains a volatile sound that belies their tightly controlled and intelligent arrangements. The band drives their compositions outside of the typical 4/4 beat; the chorus of “Trauma Hoarding” rocks in 11/8, while the verse riff in “It’s All the Same” saunters in 7/4. Similarly, almost every song uses dynamics to formidable effect, designing slow-building swells of energy and effects into the song structure so that each tune bursts with a body-shaking bang. These off-kilter rhythms and tension-building moments add an intellectual kick to the songs, giving my mind much more to chew on than just a good beat and fun melody.

Jakals have captured in their EP an experience that is all-too-common to today’s youth, then stamped it with their own hard-rocking signature sound. This record simultaneously sucks me in and pushes me away, giving rise to a strange medley of emotions that I don’t quite yet have the words to describe. Bat Brains is a collection of kickass tunes that tap into the visceral essence of anxiety and loneliness—six anthems for the anxious to remind us we aren’t alone, nor are we helpless. And if ever you’ve been unsure of your worth in this world, then this record is just what you need to hear right now.

My Top Track: “The Sound of Something Else”

Jakals is currently on tour in support of Bat Brains; you can find upcoming dates and other news via their Facebook page. Then head to Spotify or Bandcamp to stream or purchase your own copy of Bat Brains.

Email ThisBlogThis!Share to TwitterShare to FacebookShare to Pinterest
Labels: Jakals